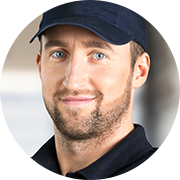 I worked with the sales person in Eatontown. He is a good communicator, by phone and email, so I always knew the status of the job. He works closely with a local stone importer in Eatontown, so, in addition to the large selection of stone in his office, we were able to pick exactly the slabs we wanted at the importer's yard, and they held them until T&J needed them for fabrication. His price was quite reasonable, and was lower than a fabricator we had used in a previous house. The sales guy came to our home during the evening and made exact templates for the counters. The completed counters fit exactly (see picture of one corner as an example, where there was no gap at all between the wall and the edge of the stone). After the installation, the mechanics cleaned off markings used during fabrication, and sealed the stone for us. Now the bad - an error was made measuring one of the pieces, and it had to be re-made. And, one of the mechanics who was making a small notch in our new cabinetry - necessary to slide the counter in place, didn't have an appropriate saw blade, and i loaned him mine. The good - the sales person offered us two remedies - a discount of a reasonable amount to accept the short island counter top (the knee overhang was short - but it covered the island cabinetry), or a re-make of that piece from a remnant of a slab from the same importer, same block of quartzite - different customer. We went to Passaic to check the color and graining of the piece, and accepted that remedy. The remedy piece was done exactly to our specification, the mechanics were exactly on time, and we were completely satisfied in the end. So, except for the annoyance of having to wait an extra week for one piece, we were very satisfied. So overall, a good job, access to a large selection of choices, good price

Went very well. They were punctual and did quality work .

T & J team was on time, did the work in promised time and the team was very professional and well equipped with everything they needed to complete the work.

Tomas, Leo and his team installed beautiful quartzite counters in our kitchen. We could not have been more pleased with the whole process start to finish. They provided me with multiple suppliers to check out the stone, I found the perfect slabs. The price was excellent - I visited several fabricators and did reference checks and by far t & j beat them all out. The installation when perfectly! The edge are great, the seams barely noticeable and the guys could not have been nicer. I highly recommend t and j stone for your kitchen or bath project!

The team was excellent, very professional. They were quick n cleaned up very nicely.

This is what I gathered about Tomas and Juan on this project: 1. Tomas gave us a good price on the fabrication/installation. 2. He even offered a free kitchen sink but we had to decline that since the sink was too small. This turned out to be a very good decision. We bought a much bigger sink and even that looks barely big enough. 3. Tomas is very good with the timeline. At the time of signing the contract he said he can do templating and get installtion done in 4-5 days. He was quite close on that; as he was able to do it for me in 7days. Thats very good when you see that some fabricators can take more than double that time to do this. 4. Tomas is very punctual. He showed up on time to do templating and was very careful with the areas where he thought that the wall was not straight. 5. After templating we went to the fabrication facility and met Juan. He had already laid out our Granite pieces before we came in. Juan then worked with us to lay the template pieces on the granite. That gave us a very good idea of what part of the slab would go to what part of the kitchen. 6. Juan and his crew did a fantastic job in the fabrication. They even polished the bottom 1inch edge of the granite. 7. As for the installation; it went smooth. They crew came on time. Brought the pieces in and had to make some minor adjustment on the cabinet height to make the granite sit level on the cabinet. They installed the sinks and put the sealer on the granite. They put the clear caulk on the gaps where the granite meets the wall. They sealed the edges where the sink meets the granite. 8. I would highly recommend T & J Stone for any Granite countertops project. They were instrumental in making my kitchen renovation project go smooth and something that I would always look back with a smile.